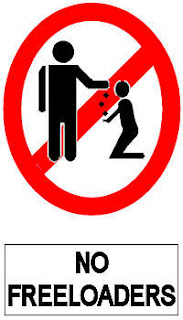 I don't understand why people of certain age group or generation think they are entitle to stuff. I bet you are going to experience this, at least once in your lifetime. One big example  is when people ask for favors. Who in the world told then that when you ask something from somebody, as a favor; let say a friend, family member or some random person, you will always get a 'yes' to your desire?

I've been experiencing this all my life; when a was a kid and now, that I'm suppose to be an adult. There are these people that ask you to do something for then, just as a favor, and when you tell then that you cannot do it they go berserk.

Like the time a "friend" of mine ask me to borrow my car so he can go on a 3.5 hour trip to "see" his then girlfriend. He tells me: Bro!, can I borrow your car for a quick trip to see my girlfriend? Please man, I'm dying to see her, etc. He didn't think that I may need my car during that time or that I can't lend it to him because if something happened my insurance won't cover it or even the fact that his driver license was expire and I knew that.

No, he just thought that it was OK to ask for my car and if he ask for it nicely he would get it. Thats just living in Bobby's World. As a matter of fact, I just told him no; plain and simple, no; that was impossible for me  to do in those circumstances; and now, because of that, we are not friends anymore.

More recently, I was walking to my car ready to go home, after a long day of hard work, and this dude, a completely stranger, comes up to me asking if I may lend him my cellphone  so he can make some calls. I just told him: -sorry man, I don't know you; I wont lend you my phone. This guy was furious. Let just say, if looks could kill.... His brain never realize that he was asking to much from a person that didn't even know him.

Apparently, he also didn't know that a cellphone has a lot of personal information about the owner and the owners contacts, not the thing to just give up that easily. Numbers, emails and physical addresses, pictures, etc. All that info can be lost in just a split second if you are not careful. Also, cellular service is not free. He did not even ask if I had an all you can eat voice plan or free nights and weekends.

Crazy; that guy and others like him don't know how much stuff cost. I just ask myself: Who told these people that they are entitle to stuff just because? It can be that no body told then that there is no free stuff. Is society as a whole going nuts? Maybe it's just all in my mind; but we need to start raising good people pronto.

It's really incredible, the level at which people think that they deserve stuff; just because they want it. What happened to that old mindset that everything should be earn? That you needed to work hard (or not that hard in some circumstances) in order to obtain certain things. Those things include the trust from other people plus the other things that come along with hard labor.

Like money and the abundance of materials things or the ability to ask for favors that can risk the well-being of the person you're asking the favor to. It's no that hard to remember that nothing is free, everything cost something to someone and if you want something; make sure that you at least deserve it or at least people think that you deserve it.