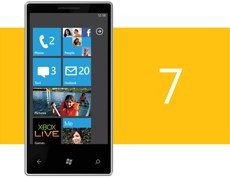 Today, Microsoft announced the first crop of Windows Phone 7 (WP7) hardware to the world. Eight months later, after the WP7 OS unveiling at MWC 2010 Barcelona, the handsets are finally ready to ship. Some of them are set to invade Europe and Asia on October 21 and others, the ones we like, are set straight for North America early this November; for a total of 10 devices (one, the HTC 7 Pro for Sprint, will be release in 2011).


Microsoft threw quite a hail mary getting HTC, LG, Samsung and Dell to design beautiful handsets that take advantage of the Snapdragon processor, gorgeous 480 x 800 WVGA displays, 5 mega-pixel cameras and 720p video recording. From HTC we'll get the HTC 7 Surround, HTC 7 Trophy, HTC 7 Mozart, HTC 7 Pro (2011) and the flagship HTC HD7. From LG we have the LG Optimus 7 and the LG Quantum; Samsung will be shipping the Omnia 7 and its Focus, both equiped with the, now almost venerable, super AMOLED screen; and last but not least, we have Dell, with the Venue Pro and its Gorilla glass.

Some of the new devices:

List of the new WP7 phones for North American markets:

List of the new WP7 phones for European markets:


List of the new WP7 phones for Asia Pacific markets: