How do you live without television? 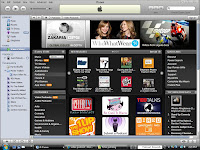 For the most part of this year, I have been living without television. I decided that it was a waste of time and money; you know, paying for cableTV because TV over the air always sucks and also the waiting to a certain hour for your favorite show. I don,t remember the exact date, but a decision was made: the hell with it! I'm tire of this bullshit! For now on I won,t watch regular old TV.
OK, but that creates a problem; how in the word can I stay current? Well, that was easy, the Internet my friend! OK, yeah; but would you rather watch and hear something than read it? Well, that problem was solve too. Welcome to the age the Podcast! One of those lonely nights(the missus was working), went I was looking for something interesting to do (or undo), it came to my mind. What about the podcasts? I knew about online videos for ages. Went they were the size of a postal stamp and took forever to download and shit. But, how in the world can I get then in a efficient manner? Well, that was easy but a didn't realized how technology would help me double time. I don't know how many of you know about RSS feeds, but in a nutshell, it is an old net thing that if you are subscribe to a certain content provider, such as TheSmokingKnife.com, you get the latest installment. In that way, you don't need to go every hour to the web location in order to get the new stuff. Now, the problem was that I didn't know how to obtain the RSS video feeds from a bunch of different sources. I was using Google reader to get the news feeds from digg, msn and some other sites/blogs, but it was really a pain in the ass to get the videos in one place. Then the solution appeared.

In a minute of disbelieve, I remembered that a had iTunes installed on my computer. Did it because it the best way to go to sync your iPod. So, there you have it. The combination of the RSS thing and the capability of iTunes to subscribe to then solve my problem. Now I just pay for the Internet connection, subscribe to my favorite programs and watch then anytime a please, be it on my PC, iPod or big screen TV(that I wish to have jeje).
Posted by: Juan Vasquez
Email ThisBlogThis!Share to TwitterShare to FacebookShare to Pinterest
Newer Post Older Post Home