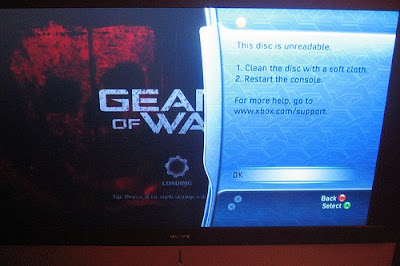 Two weeks ago my Xbox 360 broke. How can this be I ask myself. Well, nothing is forever; not even a piece of technology that cost 400 bucks! It happened while I was playing my beloved fresh copy of GTA IV. I was close to whacking this guy in one of the missions when all of sudden, the screen when white and a pop up came up saying that it cannot read the disk. No problem, try a different disk and see whats up. Well, that didn't work. Now I can't play any game! I even have new games in the shirk wrap! After a week of trying to fix this problem, I decided to call Microsoft costumer service; ...yeah, what a great idea!

After 4 calls and some discussion, because the guys back there did not understand my puertorrican address (idiots?), they conclude that something is wrong with my console (ja!). They are saying that I need to pay 100 dollars to get it fix. WTF!!! the console broke while playing your games! I use it the way it suppose to be use and it broke on me! What the hell?! But no, because my warranty ran out 1 month ago, The cannot fix it for free. No matter if the problem is theirs. So I have 2 choices: buy a new Xbox 360, the cheapest one; or pay the 100 bucks, a get a refurbish unit prone to have the same problems. I think I had been punk! (...piece of shit!).
Posted by: Juan Vasquez
Email ThisBlogThis!Share to TwitterShare to FacebookShare to Pinterest
Newer Post Older Post Home