The perils of a connected life. 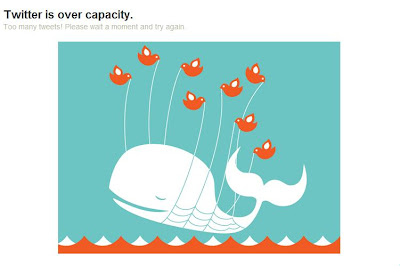 Ever wish to be alone? Now at days, that's impossible. Sometimes I try to get away from the computer for at least one full day or turn the cellphone off for a couple of hours to see how wonderful it was just a couple of decades ago; but then again, I feel like I have lost something; some opportunity, some information, ...something!

This hunger for more information, all the time, is sickening. And don't get me started on the topic about how important this information is; because it's not. I don't need to know every little thing about everybody. Why do I care if your mafia is really big, or how great is your farm; how about my karma, wanna see my pictures from the night out with my friends and that you weren't invited?. How about every little though that goes to everybody's mind? Want to check that out? Do you like it? -Who cares? -Me? I don't care. -Really?.

I suppose that everybody and their grandma and her cat, knows about this little service called Twitter. The one that everybody is on, so easy to use, just 140 characters and that it's always down or over capacity, etc. Well, yeah, it's cool. We use it here at TSK; but the thing is, I cannot stand the meaningless BS that goes every second on it. At first it was the followers thing. Back in the day when Leo Laporte and Kevin Rose were competing for the #1 twitter user spot ("...the one with the most followers") it was kind of interesting. People twitted useful stuff or simply were funny. But now, after the Oprah endorsement, everything has gone south. Now, the top twitter user is Ashton Kutcher, the idiot, male model, turn actor,turn tv show host, producer, director, etc. and also, husband of Demi Moore (another top 25 twitter user); Even the president of the USofA is on it. So much for our cool little service. As they say: there goes the neighborhood!

There are a lot of others services and social networking joints out there that people can use to spend their entire life, in front of a screen, stuck with some kind of user generated content of some sort. So, it's not just Twitter, Facebook, The Smoking Knife, Youtube or Myspace (in its last legs). Look around; Google it ( or Bing it).

Anyways, it's really good to unplugged sometimes. Get away from your computer, turn off that damned cellphone, get a good cup of coffee, sit on the porch and just enjoy life; uncut, unfiltered.